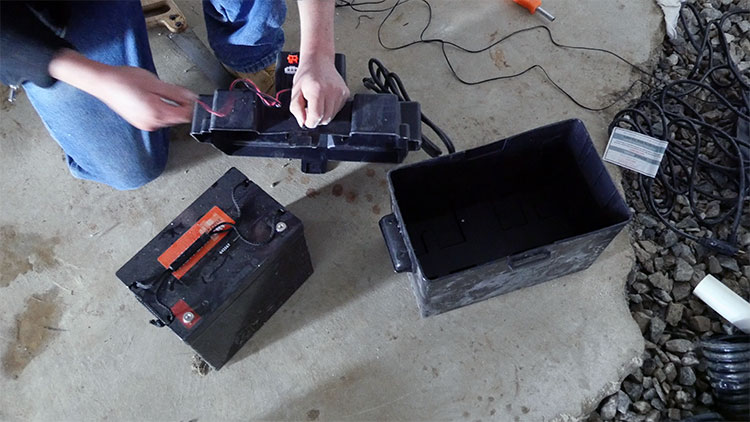 Basement flooding often occurs during a thunderstorm. Your electrical power can go out, which means a loss of electricity to your primary sump pump in your basement. You could face extensive and costly water damage if a sump cannot turn on when water enters your home. It may be time to consider a sump pump battery backup system.

A homeowner with skills in the intricacies of working with electricity and water may be able to install the battery backup system. However, most homeowners prefer to leave this task to professional sump pump installers or electricians. Sump pumps are better off on a dedicated GFCI (ground-fault circuit interrupter) outlet. A GFCI outlet halts power if a ground fault occurs. When shopping for a GFCI outlet, ensure the switch can handle the increased power consumption when the pump turns on.

The battery in a sump pump’s battery backup system should be in a water-resistant protective case. This case allows the battery inside to go alongside the sump without worrying about an electrical short occurring if you experience a leak. Backup system batteries can withstand six to eight inches of rising water.

Only use extension cords for the battery backup system until you get a proper GFCI outlet. The pump should be plugged directly into a GFCI-protected outlet above the high water line. The GFCI outlet has a test button and a reset button. The outlet should be tested annually to ensure the ground fault circuit interrupts power when the test button is triggered.

Because sump pumps rely on electricity, many backup systems have an alarm that will sound if the battery backup is activated. This alarm alerts the homeowner that the sump is not getting power from the home’s electrical wiring system. If the alarm sounds, the homeowner should immediately contact their sump pump installer to avoid the risk of water damage.

Can Battery Backups Be Added to Existing Sump Pumps?

The installer will plug the primary sump pump and a new backup pump into the battery backup controller. Then the battery is connected directly to an electrical outlet. This setup provides a trickle charge for your backup battery. If the power goes out, the sensor will activate the battery to ensure the backup pump can run when needed.

The battery used in a battery backup system should be replaced every two to three years. The continuous recharging of the battery can cause the battery to become less efficient. Call your contractor or the manufacturer if you require a replacement.

Electricity and water do not mix, which is why a sump pump installation and a battery backup system are better left to professional installers. Sump pump installers have received the training and experience to install, repair, and maintain your sump system.

Sump pumps ensure your house remains dry; however, if the power goes out, the primary electrical pump will not be able to work. Installing a battery backup system with a backup sump pump can keep your home safe even when the power is out.

Do you need a sump pump battery backup unit?
Give us a call at 888-748-2002 or book for a no-obligation free inspection and a quote.

Get a Free Quote!